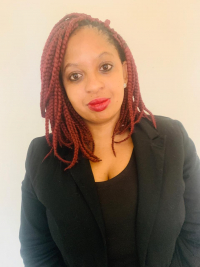 Andiswa Sibhukwana joined TIPS in October 2019. She is an economist with an interest in development economics, international trade and industrial policy. Prior to joining TIPS, Andiswa was an economic and policy analyst at the National Treasury of South Africa. She has provided technical support and co-ordinated National Treasury inputs for the BRICS strategy. She was also part of the team that provided economic analysis for sections of the MTBPS and the Budget Review at National Treasury.

Andiswa has completed a Bachelor of Social Science degree with a triple major in economics, politics and organisational psychology. She holds a Bachelor of Social Science Honours (in economics) from Rhodes University. She is currently a Master in Economics candidate at Rhodes University. Her dissertation focuses on the role of a national system of innovation in an aspirant developmental state, which assesses the role of innovation, capability, enhancing methods to promote sustainable economic growth and development between South Africa and other emerging economies. Andiswe is an Allan Gray Scholarship Recipient and an NRF Academic excellence scholarship awardee. She has also lectured in the Department of Economics and Economic History at Rhodes University.